From the moment GE14 upset the applecart for the top dogs in Malaysia those former players began scheming over how to overturn their loss of untrammelled power.

How could anyone have imagined otherwise since the show of democracy in the country had never been more than a fig leaf for a one party dictatorship by a closed circle of businessman politicians and crony establishment? They weren’t going to allow democracy to suddenly take charge without a fight.

The Harapan leadership ought to have been more wary, but instead they set about governing as if there was no threat to an uninterrupted five year term – as if Malaysia was a safely established democratic country, where politicians do not expect to be bought.

The leadership was soon caught up with rivalries and transition issues rather than focusing on the clear and present danger represented by the extreme tactics most likely being considered by wealthy former kleptocrats, who were desperate not only to evade jail, but to grab back power.

As if they were no threat whatsoever, the likes of Najib were soon being allowed to abuse bail in every conceivable way: attending parliament and rabble rousing round the country armed with cash. It became increasingly clear they were stalling their trials by every means available to their unscrupulous lawyers, at least some of whom ought to have been in the dock themselves.

Part of the problem was that the old establishment remained connected to much of the ‘deep state’ management of the country – allies within the judicial and bureaucratic classes, who still needed to be brought over to act on behalf of the wider public rather than their former patrons.

Above all there was a weakness, with two camps at the heart of government and one leader reluctant to be a lame duck for the next. The reform programme stalled without firm direction and commitment and the situation presented just the opportunity needed for that class of privileged actors used to getting their own way to bulldoze their way back into office – by whatever means.

There should be no surprise that the tactics were outrageous, audacious and utterly blatant. Behind the coup coalition are a band of power-mongers, who operated for three generations on the principle that money and the right rewards can buy just about anything in Malaysia.

Sarawak Report got a flavour of the jaw-dropping bravado back in 2015, when Najib arranged for his allies in Thailand to arrest a 1MDB source, Xavier Justo, forcing him to sign a confession that the site had ‘forged’ all its evidence on the billion dollar thefts from 1MDB. 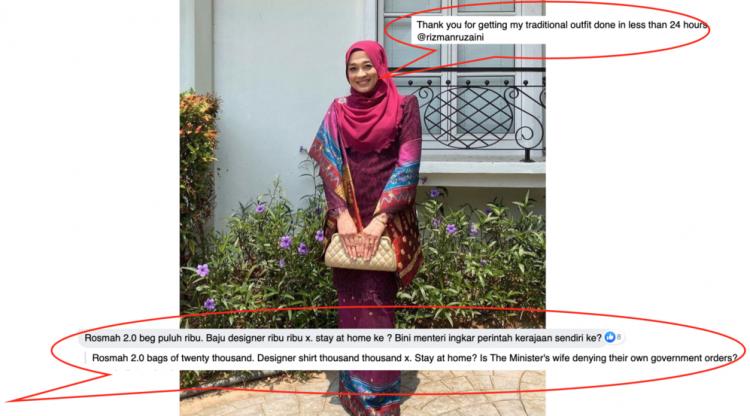 Later in the year, Najib illegally sacked his Attorney General, who had pursued investigations on the thefts and appointed a ‘yes man’ who willingly chose to believe a farrago of nonsense, including ludicrous and clearly unsubstantiated claims that the stolen money was a Saudi ‘donation’.

The same prime minister then brought in extreme ’emergency’ measures and ‘fake news’ laws, all designed to protect his cover-ups and persecute critics.

All this was supported by those who have teamed up as his remaining allies after the election: his UMNO colleagues, PAS leaders and perhaps even more significantly a coterie of tycoons who had benefitted from the previous regime.

Not for nothing was the malcontent deputy PKR leader Azmin Ali spotted at a quiet rendezvous in London with the leading businessmen ,Vincent Tan, within weeks of the GE14 result. Not for nothing did he spend a family holiday with Najib’s cousin Hishamuddin. A whole class of businessmen and politicians from the old guard was deeply vested in supporting a return to ‘normal’ and reaching out to the likes of Azmin.

Likewise, much of the ‘aristocracy’. The delay and reluctance of the previous Agong to call Mahathir to the palace post GE14 was seen by all and acted as a reminder of how Najib in particular has worked hard to sweeten the royal families towards BN by encouraging opportunities for them to make vast wealth from their positions.

Post-GE14, adjustments to the arrangements of the Forest City development were not pleasing either, for example, to the Sultan of Johor (who coincidentally called ‘PM8′ to his palace just days before the coup). Nor have other recent challenges to the planned destruction of public gazetted forest lands been pleasing to other royal families, who have traditionally stood to make their cuts from such arrangements.

Given the opportunity presented by the Azmin/Muhyiddin plot to choose an alternative to PM7 the Council of Rulers and the Agong clearly took it.

The leaders of PH had allowed themselves to rival after both Bersatu and PKR found themselves challenged by Azmin and Muhyiddin’s wide-ranging plotting, when they ought to have held together against the real threat. Defectors were drawn over by the rebels partly by greed for the opportunities of office, partly through confusion and deception but also owing to lack of leadership within PH.

Did they think beyond the plot?

As a result, Malaysia’s first ‘people’s election’ is now the victim of yet another brazen and audacious bid to rewrite history by the super-wealthy and super-powerful who consider themselves above all laws and able to get away with anything they choose.

However, extreme and outrageously audacious gambits can also fail, especially when the perpetrators don’t think beyond their raid. Stealing an Old Master may be a tough order, but it is nothing to compared to the challenge of getting rid of it uncaught.

These political plotters, who have done nothing for the past two years except work on how to destabilise the government and snatch back power, have shown themselves blind and deaf to the wider crisis they walked into and to public opinion, which has moved beyond their feudal attitudes and expects the will of the voting public to be respected.

The hotch-potch of present ministers, who owe their positions in ‘PM8’s bloated and unconfirmed government purely as reward for defection and betrayal, are glaringly unfit for purpose and already squabbling among themselves. Few have measured up to the task of leadership in the eyes of an angry public, if observations on social media are any guide. 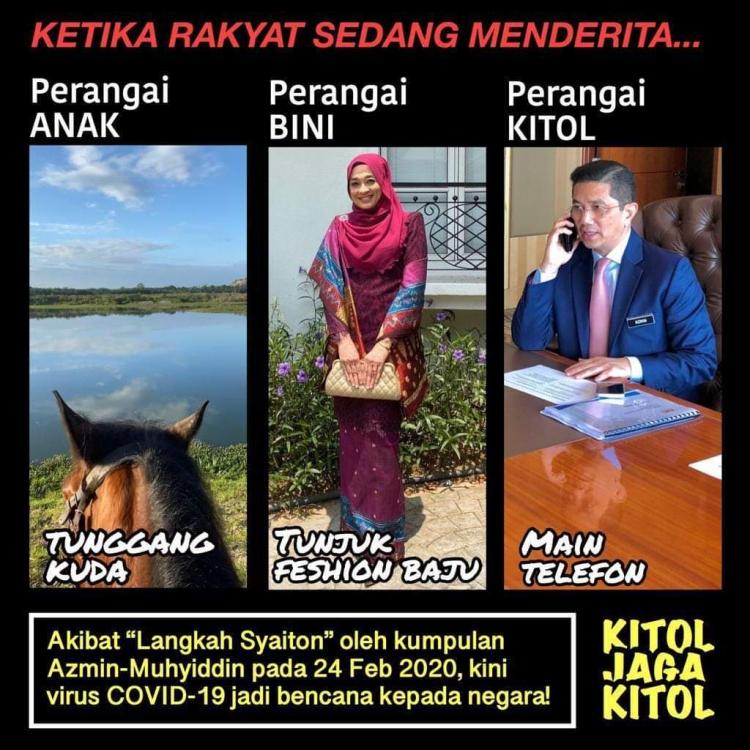 Particular fury is being vented against Azmin Ali’s family and their seemingly autistic approach to public sensitivities as they flaunt unexplained wealth – including a wife who boasted on Facebook about visiting a Royal Baby in an expensive suit in the middle of the Covid 19 lockdown.

Malaysia faces financial meltdown with the ringgit closing today, Monday, at RM4.45 to the dollar. It cannot afford to reach the RM4.5 margin call benchmark, but who seems to know or care about that problem with an unelected finance minister struggling at the helm?

This ex-CIMB chap is reportedly close to people who ‘count’ again, like Najib and the Sultan of Selangor – a royal who apparently seeks to ban the term ‘backdoor’ government to describe the political coup conducted by ‘PM8′. But he is not backed by a single popular vote as he makes decisions about the finances and taxes of the country.

As for the Economics Minister, Malaysians are weary of a man who has been for years too busy plotting to do a proper job: 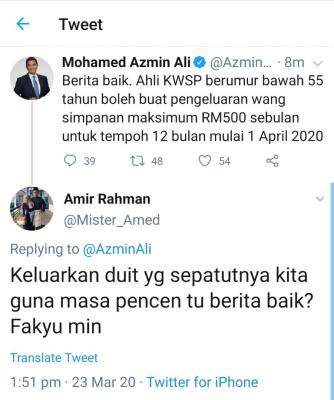 Is offering to let people cash in their life’s pensions the best idea to help hard pressed Malaysians so far from the unaccountably wealthy Economics Minister? If so, it has gone down badly.

The unconfirmed cabinet of ‘PM8′ may indeed boast the support of many in the establishment, but without proving his numbers he has no confirmed legitimacy from the supreme body of parliament and time is not endearing this administration to the people whom MPs represent.

It is a government formed against the expressed wishes of the sovereign electorate, who when last consulted voted for a different set of parties with different manifestoes to run Malaysia.

Parliament has been postponed (on grounds of dubious legitimacy) for two whole months already. There are fears the pandemic health crisis could be exploited to delay that further with all manner of ’emergency’ measures to protect the ‘PM8′ administration from testing the strength of its support.

Every day that goes by is showing up the failures of competence of a coup coalition representing a raft of conflicting agendas with just one goal in common – the pursuit of wealth and power through the abuse of public office.

Will Malaysian people let them get away with it?  They didn’t last time. ‘PM8′ has yet to achieve a safe sale for his Grand Master – it is still sitting like a hot potato in his hands.