Nope I Disagree : The Power Succession IS NOT BECOMING More Intense At All

First here is the New Straits Times (my comments in blue). 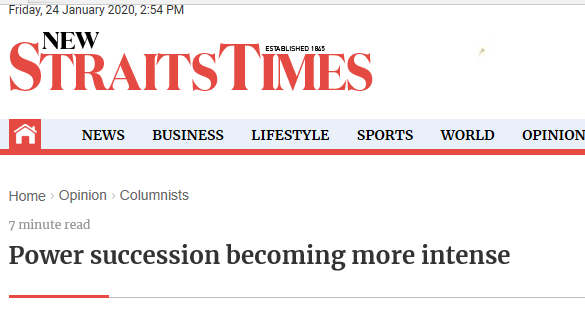 Power succession becoming more intense
48% of electorate voted for PH
with Dr Mahathir as prime minister
IN our system numbers decide prime minister
king shall appoint PM who commands a simple majority in Parliament
(OSTB : This is stating the obvious. Monday comes after Sunday but I suppose sometime you do need to state the obvious. Yes to be PM, an MP needs at least 111 other MPs to support him. Otherwise you cannot form a government.)
against protocol for any outgoing PM to recommend next PM

(OSTB : No it is NOT a protocol issue. It is a Constitution issue. The Agong can only appoint a PM who has at least 111 other MPs supporting him.)no fixed timeframe agreed for  Dr M to step down
there was no written agreement
Dr Mahathir would like to step down after APEC
constant calls from some politicians to step down by May 2020
no consensus at PH Council that Dr M steps down now
destabilising and unproductive for PM to step down half-way
(OSTB : Dr Mahathir will never hand over the PM’s job just yet. Selagi hayat dikandung badan that will not happen. Most certainly Dr Mahathir is NOT going to hand over the job to either of the Panglima Pintu Belakang.  He may have preferred the younger fellow but I think that situation is now too difficult.

It is not just the video that was blur but the guy himself is far too blur. He does not seem to know much about anything).
what are requirements needed for PM post?
Here are some ideas to consider.
He or she must:
3) have a high level of integrity, accountability, fairness to all, sense of responsibility and cannot be easily compromised with little to hide
(OSTB : There is absolutely no one like this in the running now. No one.)

4) be highly educated and knowledgeable, especially in economics, law and politics

(OSTB : Nope I disagree. Higher education does not seem to cure the bodoh DNA. Case in point : The 5 foot monkey who just got fired. That fellow has a PhD but was stupid as hell. Most certainly a PM must understand economics, business, finance, law, politics, science, technology, understand world affairs and religion, especially Islam.  There is absolutely no one like this in the running now. No one.)
6) be wise and experienced (being young but smart is not good enough in the context of managing the complexity of our diverse country). Wisdom comes with age
7) have strong leadership and people management skills
8) not use the race and religion card to divide, confuse and distract the people and would not politicise and religionise the education system and civil service.
The public (represented by MPs) would be the final judge on who should be the next prime minister.
era after Dr Mahathir may see more new parties, new coalitions, greater realignment in the local political scene
The upside would be more choices for the “rakyat” and more democratic freedom.
Conclusion :  There is no intensity at all for the power succession.

The only people who are feeling uncomfortably ‘antsy pantsy’ (having ants inside their pants) seem to be a minority group inside PKR and a larger number inside DAP.

Other than these two groups there is no one else who is as worried about the power succession at all. Period.

Here is a suggestion for the ‘antsy pantsy’ people  in PKR and DAP.

Because this is the real issue.
Neither Anwar nor Azmin have the full support of the MPs in their own PKR party.

So how can either Anwar or Azmin get the support of other MPs in say Amanah, Bersatu, UMNO, GPS (S’wak), Warisan etc?

Anwar Ibrahim never was anything and has become a complete has been.

And now with the country and the economy facing so much stress and uncertainty NEITHER of them (Anwar or Azmin) has even a single clue about how to turn things around. They do not have a clue how to make Malaysia a super advanced society or economy.

How do I know this?
You are wondering how I, Syed Akbar Ali, know this with so much certainty?

Where is their grand plan? Takdak.

And simple basic economics – why does Minimum Wage create ‘minimum’ unemployment? This is in 2nd year economics textbooks.  Do they understand?

Both of them will hang on to fools like the Indian Goat, the Arab camel jockeys or some pas-pis-pus type clowns.

Whatever the case, at the end of the day someone will  need 111 MPs to support them to become PM.

Lets call this the “111 other MPs question”.

So who shall be the next Prime Minister?

Here is the answer : Look for the MP who can gather 111 other MPs.

Who can get the “111 other MPs”.
Who in the playground now can gather 111 MPs to form a government.

Here is my guess:

1. For the immediate future, if there is a need to, I believe the front runner right now, jeng jeng jeng, will be Tan Sri Muhyiddin Yassin. He should be able to gather 111 MPs around him.

2. After that the possibilities are Hishamuddin Hussein Onn. Hisham too may be able to gather 111 MPs to support him.

3. After that maybe (a very far distant third) is Mohamed Hassan, but I dont know.

Ok I suspect that the ‘arranging the musical chairs’ for 1 and 2 above has already been done. In case of any eventualities, I think a mechanism for scenario 1 or 2 is already in place. It will be either Muhyiddin or Hishamuddin.

Why? Because they know quantum mechanics? They look like Superman? No.
Because they are closest to gathering 111 MPs behind them. Itu saja.

Now folks, bear this in mind.
Use otak ok.
Jangan emosi bodoh. It does not matter who is tall, short, fat, thin, intelligent, less intelligent, bald or not bald etc.

At this moment, the only skills required are : who can gather at least 111 MPs to support him. That person shall be the next Prime Minister.

There is no ‘her’ anywhere. Sadly Tan Sri Rafidah is not an MP and she does not want to be PM either.

And here are some other folks who  ‘have absolutely no chance” of gathering 111 MPs to support them for PM – in the immediate future :

These folks have absolutely zero chance of gathering 111 other MPs to support them.

The intensity or “ramadan” of the succession is only being felt by the Anwar Ibrahim crowd because it is becoming more obvious that he will never make it anywhere.

Azmin does not even have a crowd.