CLARE Rewcastle Brown was “surprised and saddened” by a high court ruling today that elements of defamation existed in her book, The Sarawak Report: The Inside Story of the 1MDB Expose.

The editor of the Sarawak Report told The Malaysian Insight that the defamation suit brought by Terengganu’s Sultanah Nur Zahirah could have been amicably solved.

The suit focuses on one paragraph on Page 3 of the book, which alleged that Penang financier Low Taek Jho had the sultanah’s support to obtain an official advisory position in 1Malaysia Development Bhd.

“I was very surprised. It was an unusual judgment to say the least,”   she told The Malaysian Insight hours after the ruling was made by justice Ahmad Zaidi Ibrahim.

“Particularly the judge, in his remarks, appeared to have alluded to saving the sultanah the ordeal of having to appear in court to pursue her case.

“That would appear unrelated to the legal matters that are actually at hand.”

In his ruling, the judge had said Rewcastle Brown must now turn up in court to defend herself, adding that she will be cross-examined by the plaintiff.

As for the sultanah, Ahmad ruled she did not have to appear in court as she had proven she had been defamed.

In a statement posted on the Sarawak Report website last year, Rewcastle-Brown had apologised to the sultanah if she “had been upset by any misinterpretations of our meaning”.

Sarawak Report has routinely published exposés on the scandal. It was an article by Sarawak Report that sparked a 2015 investigation into allegations of misappropriation of public funds at SRC International, for which former prime minister Najib Razak is standing trial now.

Rewcastle Brown said she was saddened that she has been “rewarded” with this ruling today for her work uncovering the 1MDB scandal.

“Given the momentous things that are going on in Malaysia, I am sad that this case (was not) amicably resolved as I have long since acknowledged that I had not meant to refer to the sultanah and had changed the reference to that of the sultan’s sister, who is recorded as being the social connection that introduced Low to the sultan.

“I have also made clear that I did not publish a suggestion that there has been any impropriety on the part of the sultan’s sister in making such an introduction.

“I’m sad that this case has carried on with the sultanah demanding RM300 million. Sadly, I’m not in the position to pay for her charitable causes.

“I am further saddened that my efforts in uncovering the scandal in 1MDB have rewarded me with actions like this,” she added.

On whether she will appeal today’s decision, Rewcastle Brown, who resides in London, said her Malaysian legal team has yet to be consulted, adding that she lived “eight hours behind”.

“Exactly what transpired today – and it is a legal action – all these things need to be evaluated before I can make a fulsome response.”

The sultanah is claiming RM100 million each in general damages from Rewcastle Brown, the publisher and the printer.

The sultanah had refused to accept the author’s apology and instead, through her lawyer, said she would donate all the money awarded to her by the court to charity should she win her case.

KUALA LUMPUR: Terengganu Sultanah Nur Zahirah will not be taking the stand to testify in her suit against Sarawak Report editor Clare Rewcastle-Brown and two others over defamatory statements made against the former in Page 3 of ‘The Sarawak Report (SR) – The Inside Story of 1MDB Expose’.

High Court judge Datuk Ahmad Zaidi Ibrahim made the decision after allowing the Sultanah’s application under Order 14A of the Rules of Court 2012 to dispose part of the trial through points of law.

In his judgment, Zaidi said the plaintiff (the sultanah) had succeeded in proving that the alleged defamatory passage on Page 3 was referring to her.

He said the court was of the view that the four elements required for defamation has also been fulfilled by the plaintiff.

The judge then set Jan 20 for case management to fix the trial dates.

In her application, Sultanah Nur Zahirah sought for the court to determine whether the article was referring to her. that it was published by a third party and was defamatory in nature.

Meanwhile, outside the court, Sultanah Nur Zahirah’s counsel Datuk Mohd Haaziq Pillay Abdullah said with the decision, his client does not have to come to court to testify.

“The application was to have a major part of the trial removed, which was allowed.

“The defendants will now have to come to court and it is open for them to state the defence available to them under the law.

“The plaintiff has been defamed and the elements of defamation has been proven by the plaintiff,” he said.

In her statement of claim, she alleged that Rewcastle-Brown had used defamatory statements in the book, which was published in August last year, and printed by Vinlin Press.

She claimed that the defamatory statements implied that she was involved in corrupt practices and interfered in the administration of Terengganu as well as used her role to influence the setting up of Terengganu Investment Authority (TIA) and assisted fugitive businessman Jho Low or Low Taek Jho to become the advisor of TIA.

Sultanah Nur Zahirah alleged that the statements were defamatory as she was neither involved in the administration of the state nor the setting up of TIA now known as 1Malaysia Development Bhd (1MDB), and claimed that the statements had caused her embarrassment and tarnished her reputation in the eyes of the public.

She is seeking RM100 million in damages from each of the defendants.

She is also demanding that the second defendant (publisher) withdraw the books containing the defamatory statements as well as to stop the third defendant (printing company) from printing more copies of the book. 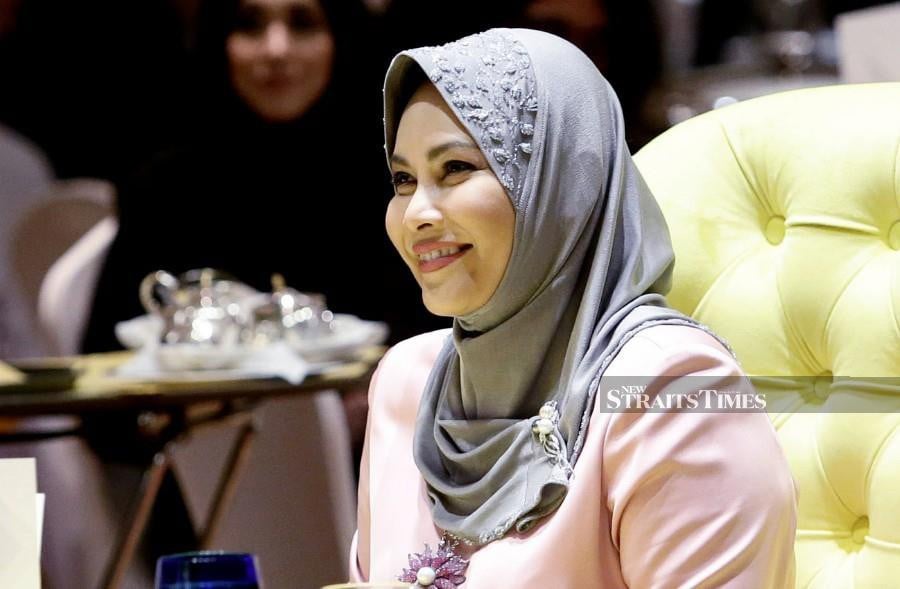 Terengganu Sultanah Nur Zahirah sought for the court to determine whether the article was referring to her. that it was published by a third party and was defamatory in nature. -NSTP/File pic

Terengganu Sultanah Nur Zahirah sought for the court to determine whether the article was referring to her. that it was published by a third party and was defamatory in nature. -NSTP/File pic