Anger is building up again in the East Malaysian states with Dr Mahathir Mohamad’s statement this week on the oil royalties.

Somehow we get the feeling that we have been led up the garden path by the Pakatan Harapan (PH) government.

Mahathir is now changing his stance and seems to have run out of ideas on how to deal with this sticky issue. His incoherent response to the oil royalties issue is sowing more confusion, creating a wider rift between the federal and state governments.

Mahathir in a Reuters interview said the goverment is considering selling stakes in Petronas to states where the company’s oil and gas fields are located. It seems odd that the oil-producing states like Sabah and Sarawak are now offered stakes in Petronas to help a debt ridden federal government.

The Borneo states claim territorial rights to its oil and gas resources within the state boundary under the Malaysia Agreement 1963, and is unlikely to compromise on anything less than 20% oil royalty.

Many East Malaysians feel that the federal government has milked these states for the last 54 years to build things like the Petronas Twin Towers, and the air conditioned elevated walkway connecting the Kuala Lumpur Convention Centre and Pavillion. Meanwhile, the Borneo states are still struggling with poor infrastructure: roads, electricity and water.

Petronas also spends a huge sum of money on Formula One. George Dudley of Sports Pro estimated the sponsorship to be more than US$42 million (RM168 million) annually.

The government should also stop spending money to start a third national car project, or some worthless drones. That money can help a lot of people out of poverty in the country and make Malaysia a better place.

Mahathir has now come clean and confessed that the government cannot meet the demand by the states to quadruple the royalties.

In September, after the Malaysia Day celebrations, he said Sabah was going to be the richest state in the country once the deep oil wells yield their production.
Now, Sabah and Sarawak are destined to remain poor as their oil resources will be used to prop up the debt ridden federal government.

Say Sabah and Sarawak fall for Mahathir’s trap, how much would it cost the Borneo states?

In an article, Pankaj C Kumar said Putrajaya could raise RM86 billion by selling 10% of Petronas to the market or RM215 billion if it sells 25%.

For the Borneo states, to buy a tiny bit of the share of say 1%, they will have to fork out RM8.6 billion.

Can Sabah and Sarawak come out with such an amount of money to buy 2-3% of Petronas shares?

Furthermore, why should the Borneo state buy shares in Petronas when they are claiming ownership of the oil and gas resources within their territories?

If Petronas still claims sole oil rights to oil and gas resources in Malaysia under the Petroleum Development Act 1974, the full argument has still yet to be tested in court and will be subject to legal challenge.

For Sabah, the state reserves is estimated to be RM6 billion, and forking out RM8.6bil to buy 1% equity in Petronas will make the state bankrupt.

It was reported in 2011 that Petronas Chemicals Group Bhd offered 25% equity in Project Samur in Sipitang to the Sabah state government, and that Petronas offered a 10% stake in Liquefied Natural Gas Sdn Bhd 9 (LNG 9) in Bintulu, Sarawak in 2014.

If this offer had been taken up by Sabah, the state government would be heavily in debt by now.

Mahathir’s argument that such a move may also give states such as Sabah and Sarawak a say in the running of Petronas is like telling a bad joke. 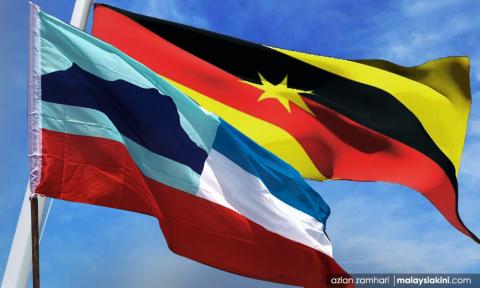 Assuming that Sabah and Sarawak buy shares worth billions in a company with an average value of about RM862 billion, according to Pankaj’s calculations, the two states will end up with insignificant voting shares to influence any decision-making at the Petronas board level.

Sabah seems always to be on the receiving end of Putrajaya’s failures. Under Najib Razak, we had the Trans Sabah Gas pipeline project (TSSGP) costing billions, paid on timeline basis but without work done. The whole project was a sham.

While it is easy to blame the previous government for current debts, it would be unfair if Sabah is made to suffer because of the corruption originating from the federal side.

Procrastinating over the oil royalty will not solve anything. The people of Sabah and Sarawak demand answers and most of all, action.

Mahathir cannot pass the buck or hide behind committees. The prime minister can decide.

Najib, in sworn statements in his trial, said: “If the court allows me to explain, the prime minister’s powers in Petronas are more overreaching compared to SRC.”

Najib added, “The article was drafted in that way so that the prime minister can make sure the chairman acts according to the government’s policies.”

By Najib’s explanation, it is clear that Mahathir as prime minister can decide on the quantum of oil royalty to be given to Sabah and Sarawak, and Petronas has to obey his instruction.

Petronas too should also stop exporting more LNG. Instead of just monetising LNG for the sake of federal coffers, they should allocate gas for downstream projects in Sabah.

The second ammonia and urea plant is now stuck because of the lack of gas. Code named project “Saffron” the project which would have created jobs and helped the state economy is now stalled.

Petronas should not be just world LNG champion abroad but also at home. Advanced nations such as Japan and Korea have benefited greatly from Malaysia’s LNG exports while the oil producing states of Sabah and Sarawak remain poor.

It’s now or never for Mahathir to make amends.