PKR president Anwar Ibrahim said some within the party have forgotten their roots, in what appears to be a veiled jab at his deputy Azmin Ali.

“It is not about ‘whoever supports me will get projects, whoever doesn’t will not get’.

“This was one of Umno’s bad behaviour back then. That is what we are trying to correct,” Anwar, who is the Port Dickson MP, said during his speech at the Otai Reformis congress held in Shah Alam today.

It was reported that there was a meeting held on Monday night at Azmin’s Putrajaya residence with over 20 BN MPs and a handful of PKR MPs.

BN president Ahmad Zahid Hamidi, who was not present at the meeting, later said he was told the meeting was merely to discuss channelling government projects to their constituencies.

The meeting had set tongues wagging with speculation of its purpose, ranging from support to the current Prime Minister Dr Mahathir Mohamad, to forming a new party, to the Umno MPs having lost faith in their party.

However, participants of the meeting have consistently denied these speculations.

Meanwhile, Anwar called for people to have patience over the transition of the premiership, saying that he wants a peaceful transition.

“I choose the path of a peaceful transition. We give space to Mahathir to lead and to heal the economy so that the transition can happen smoothly and without any problems.

“That is my stand and I ask you all to be patient. I am not worried or disturbed,” he said.

The decision on the premiership rests with the Harapan council, he said.

Mahathir had said prior to the last general election that he would step down as prime minister to make way for Anwar within a few years.

However, recently there has been speculation about unrest over the transition.

PKR Youth chief: If you cross the line, you’ll face disciplinary board 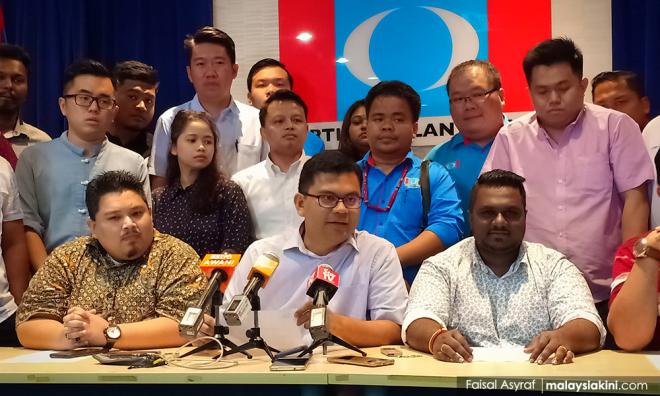 PKR leaders can argue and raise certain issues publicly, is in line with the party’s spirit of upholding democracy and fighting for reform, but they must not go overboard, says PKR youth chief Akmal Nasir (above).

Akmal said those who cross the line must be ready to face the disciplinary board.

Akmal was asked to respond to the Pakatan Harapan presidential council chairperson Dr Mahathir Mohamad who yesterday advised Harapan members to voice their problems to the respective party committees or the presidential council so as not to create a bad perception to the people.

Mahathir did not make any specific references, but some Harapan parties have been at loggerheads internally.

PKR, especially, is struggling with in-fighting between its president Anwar Ibrahim’s faction and his deputy president Azmin Ali’s camp.

“PKR, we are reformists in a democratic party. It’s just that if (the leaders’) statements cross the line, this is the responsibility of the disciplinary board to make a decision or scrutinise the matter,” Akmal said when met after the central youth wing meeting in Petaling Jaya.

Asked if the PKR youth wing would heed Mahathir’s advice, Akmal opined that the respective leaders’ priority is to lift up the party’s image first.

“In regard to the advice, if we want to work together (muafakat), we should lift up the party’s image first.

“If we want to defend the party and the coalition, we have to see the big picture (berjiwa besar) and respect the party’s operations and structure,” he said.

Akmal said the meeting, which was attended by about 40 representatives of the youth wing, had also discussed the Harapan presidential council meeting yesterday on the defeat in the Tanjung Piai by-election.

PKR youth deputy chief Hilman Idham (above) was not present at the meeting today.

Akmal reiterated that the congress of the youth wing next month will be officiated by PKR adviser Wan Azizah Wan Ismail.

Akmal brushed off the disagreement, saying that what was important was not the internal matterm, but the voice of the youth to be heard in the congress.

“This is not about me, Hilman, or any individual. The decision (on who officiates) comes from an official meeting which was held at the central level.

“Our objective is that we don’t want to be seen as tied to internal issues and I don’t want the disputes to continue being discussed outside.

“On the leadership level, we want the agenda of the youth highlighted. We, as politicians, are responsible to highlight problems concerning the youth,” he said.

Akmal added that the youth wing, via the upcoming congress, wants to show that PKR is the strongest party in the coalition and ever ready to give its commitment to the coalition.