KUALA LUMPUR: Entrepreneur Development Minister Redzuan Yusof is to take a test ride in Malaysia’s “flying car” on Thursday, and he invited opposition MPs to witness the test run of the vehicle, also known as the air mobility platform.

Speaking at the Dewan Rakyat today, Redzuan said: “I want to repeat my invitation to the respected MPs. This Thursday, I myself will be riding the flying vehicle or two-man vehicle.

“I invite Mohd Shahar Abdullah (BN-Paya Besar) if he wants to come. If he wants to take pictures while sitting on it as it flies, we can sit together,” he said.

At this, Dewan Rakyat Speaker Mohamad Ariff Md Yusof compalined in jest that he had not been invited to view the test run, drawing laughter from the benches.

Redzuan replied: “If we have time and there’s no session after 2pm please come to Subang.”

The “flying car” project, by a private Malaysian company, was announced at the Langkawi air and maritime show earlier this year and drew derision and sarcastic comments on social media and scepticism from opposition MPs.

In March, the vehicle’s developers, Aerodyne Group, said the car, known as Vector, is a drone powered by four motors running off a lithium-ion battery 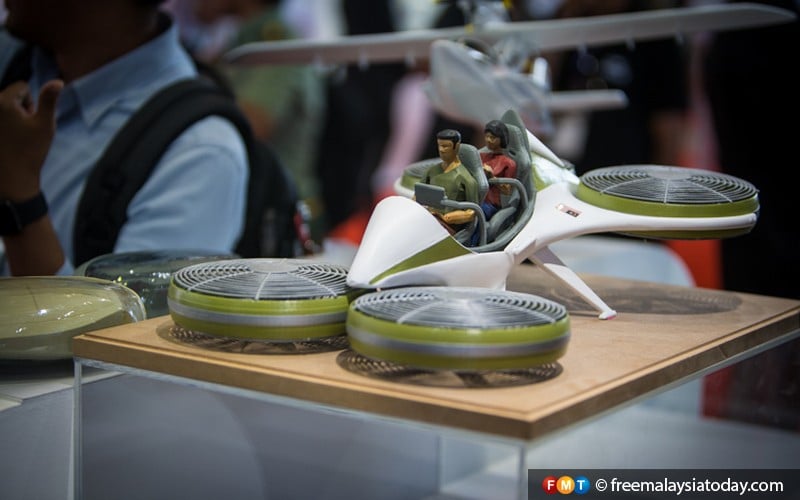 The vehicle could be used to transport people and cargo and also be used for surveillance, the company said.

Redzuan told the Dewan Rakyat that Malaysians were “hesitant followers” when it came to embracing innovation, adding that it was difficult to implement new forms of innovation in the country.

He said the government is looking at shaping entrepreneurs and leaders who had the right understanding and awareness of new technology, stressing that Malaysia needs to move in accordance with international development.

There was a need for a change of mindset if Malaysia wanted to embrace new ways to stimulate growth.

“I’m not the only one responsible. We are all responsible as leaders, whether in the government or opposition, to ensure the community is shaped in our efforts to develop Malaysia as an entrepreneurial nation by 2030,” he said.

Redzuan made his remarks during the debate on the 2020 budget allocation for his ministry.

Entrepreneur Development Minister Redzuan Yusof said the facility is in the form of Term and Revolving financing.

It is capped at RM50 million for each applicant.

“However, if the amount required is above RM50 million, it will be considered on a case-to-case basis,” he said at the signing of an agreement between the bank, Malaysia Rail Link Sdn Bhd and China Communications Construction (ECRL) Sdn Bhd.

Redzuan said that the allocation can be used for contract financing, working capital and purchase of equipment.

“I am confident that with such financing support, local contractors can be at ease and concentrate on completing the projects assigned on time without undue anxiety or worry.”

In August it was reported that the China Communications Construction Company Ltd (CCCC), received 1,321 submissions during the pre-qualification exercise to identify the potential subcontractors for the 40% civil works portion of the ECRL.

CCCC is the engineering, procurement, construction, and commissioning contractor for the 640km ECRL project which connects Kelantan to the Klang Valley. The project is expected to cost RM44 billion.

About 70.7% of the 331 construction companies shortlisted as subcontractors are Bumiputera companies.