‘The Nothing Breaks Like a Heart’ singer announced in a statement on Saturday, just hours before the Australian actor’s 29th birthday on Sunday, that they had separated to “focus on themselves and their careers”.

It comes as Miley was spotted kissing Brody Jenner’s ex-wife Kaitlynn Carter during a girls’ getaway to Lake Como, Italy, on Friday.

The ‘Wrecking Ball’ hitmaker revealed in her split statement that she and Liam are “ever-evolving” and “changing” as individuals, insisting that they will remain “dedicated parents to all of their animals”.

The singer and actress, who identifies as pansexual, revealed in a candid interview last month that she viewed their marriage as “confusing, complex and modern”, insisting that she was still “very sexually attracted to women” and that she doesn’t “fit into a stereotypical wife role”.

Miley and Liam had been dating on and off since 2010, when they met on the set of the Nicholas Sparks film adaptation of ‘The Last Song’.

They were initially engaged in June 2012, but they called it off in Sept 2013, before rumours stemmed in Jan 2016 that the engagement was back on.

Miley confirmed they were engaged during an Oct 2016 appearance on Ellen, and they were married on Dec 23, 2018, at their home in Franklin Tennessee. 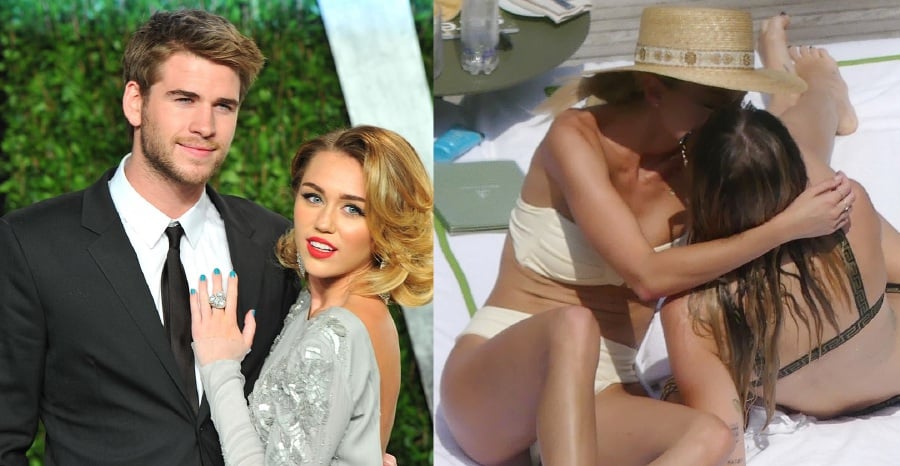 Meanwhile, Miley was seen getting cosy with Kaitlynn in the Italian sunshine as they continue to enjoy their Italian getaway.

The Hannah Montana star appeared to be getting extremely hands-on with the blogger, 30, as they enjoyed a spot of sunbathing together.

Miley tried to shield her face with a wide-brimmed hat as they shared a series of smooches in the sunshine.

The kisses also came as Kaitlynn recently split from The Hills star Brody Jenner after a year of marriage.

It was revealed when they broke up that the pair was never legally wed in the US, despite a wedding ceremony overseas in Bali, Indonesia.

Brody’s rep, Scott Newman, confirmed that the son of Caitlyn Jenner and his wife “decided to amicably separate.”

Brody and Kaitlynn announced their engagement back in 2016 and married almost two years later.