Beauty pageants are in full swing this month, with Miss World and Miss Universe taking place on Dec 8 and Dec 17 respectively. We look back at entertainment figures who got their start in pageants.

Since winning Miss Malaysia World in 1983, Michelle Yeoh has become one of the most successful Malaysian actresses of our time. Her first movie was 1985’s Yes, Madam, but she made her breakthrough in Jackie Chan’s 1992 film Police Story 3: Supercop. 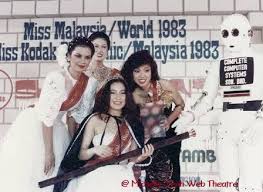 One of the most recognisable voices on radio and commercials, Yasmin Yusoff, got her start as the winner of Miss Universe Malaysia 1978.

Besides being a notable voice actor and radio announcer, Yasmin recorded two albums and starred in films like Mekanik, Selubung, Ringgit Kassorga, Susuk and Pisau Cukur.

She is an accomplished singer, with eight albums under her belt, and an award-winning actress (winning Best Actress twice at the Malaysia Film Festival) with a large and diverse body of work including Sembilu, Maria Mariana, Soal Hati and most recently, Polis Evo 2.

Way before Lucy Lawless played the fearless Xena in Xena: Warrior Princess, she was a beauty queen. Lawless won Mrs New Zealand in 1989, a pageant for married women.

Halle Berry has a history of making history. After being crowned Miss Ohio in 1986, she went on to compete in Miss USA, where she was named first runner-up.

The placement meant she would represent her country at Miss World, making her the first African-American woman from her country to do so. Berry finished sixth in the competition.

Since then, Berry has built her name as an actress with iconic roles such as Storm in the X-Men movies. In 2001, she made history again as the first African-American to win a Best Actress Oscar for her performance in Monster’s Ball.

Halle Berry in ’Die Another Day’.

Just six weeks before Vanessa Williams finished her reign as Miss America 1984, a magazine published unauthorised nude photographs of the beauty queen. Williams felt pressured by the Miss America organisation to give up her crown, and she eventually agreed.

Williams didn’t let the setback get to her. She went on to carve a diverse showbiz career, with eight albums to her name (cue the mega-hit Save The Best For Last) and numerous TV and film roles (who can forget the oh-so-sassy Wilhelmina Slater on Ugly Betty?).

In 2016, 32 years after the ordeal, CEO Sam Haskell apologised on behalf of the Miss America organisation.

“Though none of us currently in the organisation were involved then, on behalf of today’s organisation, I want to apologise to you and to your mother, Miss Helen Williams.

India had a strong track record in beauty pageants between the 1990s and the early 2000s, and it started with Sushmita Sen, who became the first woman from her country to win Miss Universe in 1994.

Since then, Sushmita has enjoyed an illustrious Bollywood career, appearing in popular titles like Main Hoon Na and Biwi No. 1.

Months after Sushmita won Miss Universe, Aishwarya Rai (pic) did India proud when she was named Miss World in 1994.

Often called “the most beautiful woman in the world,” Aishwarya has taken Bollywood by storm, starring in countless high-profile movie roles, including Devdas, Dhoom 2 and Bride And Prejudice.

So revered was her contribution to Indian cinema, the international film community took notice.

Aishwarya became the first Indian actress to be a jury member at the prestigious Cannes Film Festival in 2003.

In 2014, the Miss World organisation named her the most successful Miss World of all time.

Priyanka Chopra is the woman of the hour. After starring in numerous Bollywood titles, Priyanka managed to conquer Hollywood too in 2015 when she led the cast of Quantico for three seasons. It was a significant feat – Priyanka was the first South Asian actor to headline an American network drama series.

After Quantico’s cancellation this year, Priyanka aka Mrs Nick Jonas is moving on to films, starring opposite Rebel Wilson and Liam Hemsworth in Isn’t It Romantic and Chris Pratt in Cowboy Ninja Viking.

But she got her start after winning Miss World 2000.

Maggie Cheung in ‘In The Mood For Love’.

Gal Gadot may not have won Miss Universe when the Israeli actress represented her country in 2004, but she is proving herself to be the queen of a different kind of universe.

Wonder Woman, which sees Gadot playing the titular role, has been widely credited for reviving the DC Comics cinematic universe, after the less than positive reception for Batman V Superman: Dawn Of Justice and Suicide Squad.

Fun fact: did you know Lynda Carter, who also played Wonder Woman in the 1970s TV series, won Miss World USA 1972 and was a semifinalist on Miss World?

Maggie Cheung was crowned Miss Hong Kong 1983 and went on to be a semi-finalist on the Miss World stage. Post-pageant, Cheung is an acting tour de force. After getting her start in commercially successful Police Story film series, she took on meatier roles, notably, Wong Kar Wai’s In The Mood For Love and experimental French film Irma Vep.

Her portrayal of a recovering drug addict in Clean led Cheung to win a Palme d’Or, the highest prize at the Cannes Film Festival, for Best Actress in 2004.